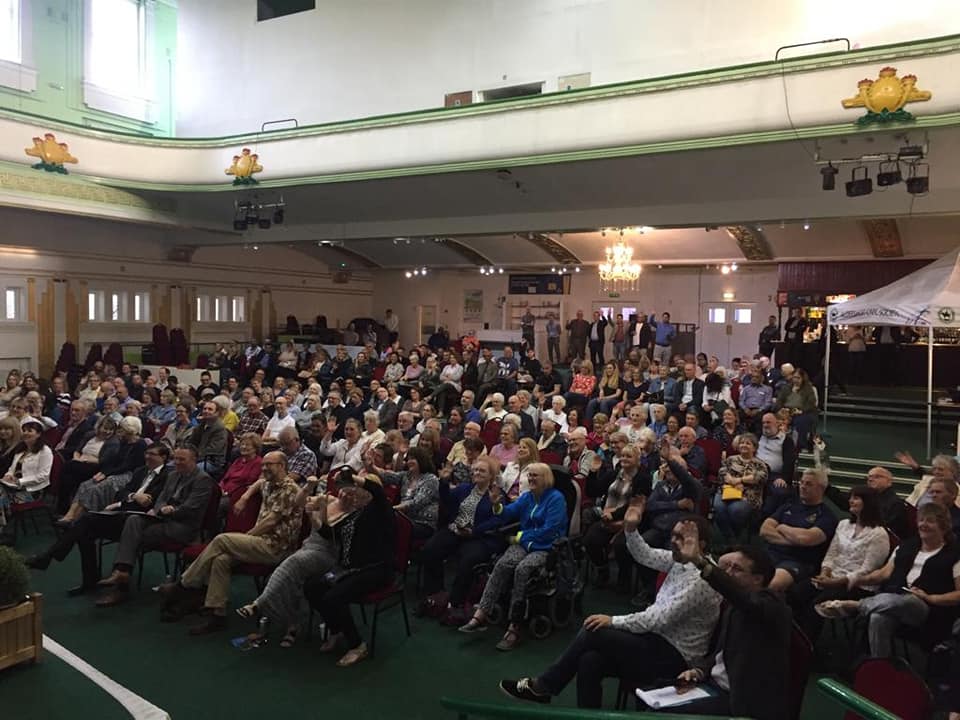 Local people queued around the building as Aldershot Civic Society hosted an Emergency Town Centre Meeting. This, the first public meeting of their Aldershot Town Centre Community Conversation, is the Society’s response to the ongoing decline of Aldershot town centre. As multiple developers propose large-scale development, the Society seeks to develop creative, collaborative, and ambitious solutions that are rooted in our community.

300 people attended Aldershot Civic Society’s Emergency Town Centre Meeting on Wednesday 15 May 2019 at the Victorian theatre building The Empire. The meeting brought together decision makers, experts and local people to learn what is being planned and for community members to share their ideas for the future of the town.

Cllr David Clifford, Leader of Rushmoor Borough Council, made clear that both the council and Shaviram intend to demolish and redevelop the properties, with minimal retention of historic buildings. Cllr Clifford stated that £8.4m of Housing Infrastructure Funding is dependent on the projects starting on site by March 2021, as per funding requirements from central government.

Justin Coll, Chair of Aldershot Civic Society said, “The Civic Society believes that these developments hold enormous potential for a significant transformation of Aldershot town centre, and it is crucial to their success that they take place with sensitivity to the Victorian built heritage and with significant community input and support. Our Town Conversation provides a means for this.”

“The funding deadline doesn’t leave a lot of time until the council’s plans need to be fixed, which means that local people must have a genuine say on the plans very soon. Consultation is planned for the summer, but the Civic Society is concerned that there will not be time for changes to be made in response.”

Speaker Ian Harvey, Executive Director of Civic Voice, outlined the opportunities for communities to lead change by sharing examples of how communities in other places have made a difference. He encouraged a collaborative approach to identifying what the town might become and championed the ability of Aldershot’s community to take a lead in determining the future of the town.

The audience raised a plethora of issues and ideas, including creative ideas of how to transform the town centre through experiences, celebrating the town’s heritage, addressing parking issues, tackling anti-social behaviour and its root causes, and supporting new residents at Wellesley to feel and be involved in the future of town. The range of issues raised will be explored as part of the Town Conversation with a view to developing ideas and solutions.

Justin Coll, Chair of Aldershot Civic Society, said, “Aldershot Civic Society has identified that now is the time for our community to speak up to turn the tide in our historic town, and to address impending large-scale development. That’s why we’re launching the Aldershot Town Centre Community Conversation, and we will work tirelessly to revert the serious decline our town has experienced. Our town’s communities are resourceful and passionate, and together we are able to – and will – develop and support creative and ambitious solutions to improve our town.”