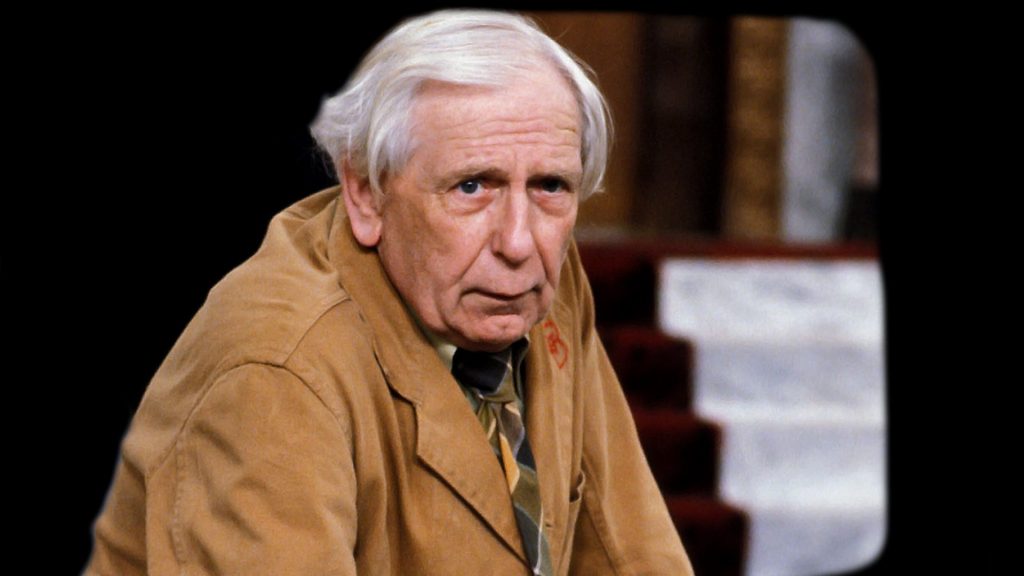 On July 15 2017 at 2 pm the singer and actor Jess Conrad OBE will unveil the Aldershot Civic Society’s first blue plaque to comedian and actor Arthur English at 22 Lysons Road, where English was born in 1919.

Arthur English lived in Aldershot for all of his life apart from service during World War II and was described as ‘Aldershot’s Favourite Son’. He attended West End Boys School and made his first stage appearance aged 10 when he joined a group from Gale & Polden called the ‘Five O’clock Follies’ as an acrobat. After leaving school in 1933 he briefly worked at Fisher’s Hotel in Farnham before serving in the army in World War II with the Hampshire Regiment and the Royal Armoured Corps. English worked as a painter and decorator in Aldershot after the war and in the evenings worked as a semi-professional entertainer in various local venues polishing up his comedy routine. He married Ivy Ruth Martin in 1941; it was she who made his enormous kipper ties out of brightly coloured curtain material at the beginning of his stage career. They had two children, Tony and Anne English.

In 1949 English became resident comedian at the Windmill Theatre, staying as the principal comic until August 1950. His comedy routine was delivered in the persona of a wartime “spiv” and he became known as “The Prince of the Wide Boys” wearing a kipper tie four  feet wide.

His radio work began with ‘Variety Bandbox’ for the BBC before moving into television in the early 1970s in such series as ‘Follyfoot’, ‘Dad’s Army’, ‘The Ghosts of Motley Hall’, ‘Are You Being Served?’ and ‘In Sickness and in Health’, among others. In 1978 he was the subject of ‘This Is Your Life’, while in 1983 he was a guest on ‘Desert Island Discs’. He played Frosch in ‘Die Fliedermaus’ with English National Opera and appeared in an episode of the American TV series ‘Magnum, P.I.’ His film roles include ‘Percy’, ‘Love Thy Neighbour’, ‘Barry McKenzie Holds His Own’ and ‘Are You Being Served?’

In 1977 English married Teresa Mann, and with her had a daughter – the actress Clare-Louise English.

English was President of Aldershot Town FC and designed the new club badge depicting a rising phoenix. He had also been a long-standing member of the showbusiness charity the Grand Order of Water Rats, a Freeman of the City of London and an Honorary Freeman of the Borough of Rushmoor.

Jess Conrad OBE is a Past King Rat of the showbusiness charity the Grand Order of Water Rats. He was appointed to the Order of the British Empire in 2011 for services to charity.

Conrad began his career as a repertory actor and film extra before being cast as a pop singer in a television play Rock-A-Bye Baby, but before long life imitated art and Conrad was transformed into a pop star. He appeared in Oh Boy!, Wham! and Boy Meets Girl which led to a recording contract with Decca Records and some early 1960s hits with ‘Cherry Pie’, ‘Mystery Girl’ and ‘Pretty Jenny’. Following his recording career he continued acting in low budget movies and pantomime, and in the 70s appeared in the musicals Joseph And The Amazing Technicolor Dreamcoat and Godspell as well as taking a cameo role in the Sex Pistols’ celluloid excursion The Great Rock ‘N’ Roll Swindle. His film roles include  Serious Charge, The Boys, Rag Doll, K.I.L. 1 and Konga as well as The Queen’s Guards. Conrad continued to work throughout the 80s, and in 1993 he shed his ‘squeaky-clean’ image when he appeared as Prince Charming, with comedians Charlie Drake and Jim Davidson, in Davidson’s ‘blue’ pantomime, ‘Sinderella’.