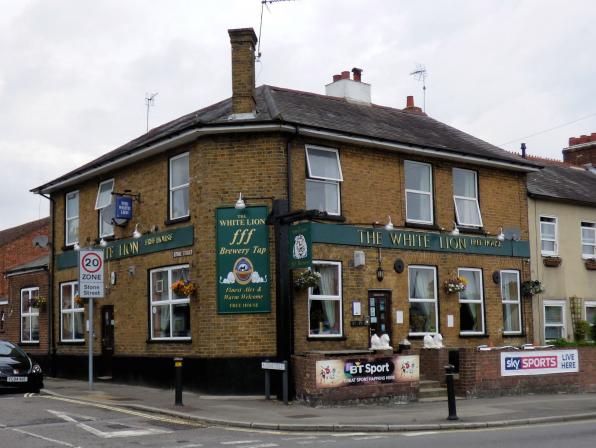 With the Asset of Community Value (ACV) designation for the pub expiring in 15th May the Aldershot Community Pub Group (ACPG) has formally advised the owner of the pub that they wish to buy the White Lion, once they have raised the necessary capital and had the opportunity to carry out the necessary inspections and surveys.

This will ensure ACPG continues to be recognised as a serious bidder, despite the ACV no longer being in place and that negotiations can continue once the impact of the Covid-19 pandemic becomes clearer.

A £2,500 bursary has been awarded to the campaign group to help with their start-up costs. This very welcome award has been provided under the “More than a Pub” programme which is funded by The Power to Change Trust as part of a wider initiative to grow the number of community pubs opening across the UK. Plunkett Foundation is the lead organisation delivering the programme. It is a real boost to the campaign and shows that there is strong local support.

Due to the Covid-19 Virus, in accordance with Government directive, the White Lion, together with all pubs, has been required to close for the foreseeable future. However, the Aldershot Community Pub Committee are still holding virtual meetings to ensure that saving the White Lion still continues to make progress.

The Aldershot Community Pub Committee has agreed that shares will be offered in the pub at a minimum of £20 and that voting will be on the basis of one share one vote.

The Committee is also inviting potential investors to make a pledge in support of the pub. This is not a commitment to invest, but gives an indication of how much share capital might be raised and greatly helps with securing other funding.

Further details and the opportunity to make a pledge can be found on the online pledge form.

Please fill out this quick questionnaire.

To succeed, the pub campaign group need as many people as possible to get involved and raise a lot of money quite quickly. But first they have to prove there is plenty of support from local people to keep the White Lion going as a traditional English local pub and develop it into ‘More Than a Pub’, offering other community activities outside pub opening hours. The questionnaire is designed to provide the evidence that is needed.

So please complete the questionnaire as soon as possible and keep spreading the word as widely as you can, the more the merrier!

In recent years, Britain’s pubs have been closing at an alarming rate – on average, twenty pubs call last orders every week. Tragically, many of these pubs have been popular and valued community facilities in the past and could be so again in the right hands. It’s unfortunate that many owners regard pubs primarily as property assets which are more valuable if their use can be changed to something else like a house or shop.

However, all across the country, communities are fighting back. Sometimes it’s sufficient to see off an unwanted planning application through effective campaigning. In some cases, though, the best way forward for local people has been to buy the pub themselves. Well over 100 pubs are now community-owned with many more in the pipeline.

In recognition of the fact that communities value their pub, but often need time to organise and raise funds, the Government introduced the Asset of Community Value (ACV) Regulations. This means that a community group can seek to have a local pub listed as an ACV and if successful then if the owner later decides to sell the pub, the owner has to give the community up to 6 months to submit an offer to buy the pub.

This is exactly the situation that The White Lion in Aldershot currently finds itself in. The White Lion was built shortly after the army arrived in Aldershot in 1854 and is one of the oldest surviving pubs in the town. In the eastern suburbs of Aldershot, this is a proper locals’ pub with loads of 60’s atmosphere, exactly the sort of pub that offers so much to its local community. The pub is well known to local Real Ale enthusiasts too for its 10+ years in the Good Beer Guide, during which time it has been leased to and run by Triple fff Brewery. The lease expired in January and regrettably Triple fff decided not to take on a new lease. The freehold is owned by a private individual, who has decided to sell up. The freehold of the pub is available for circa £275,000 and whilst the owner is apparently perfectly willing to sell the pub as a going concern and the existing landlord happy to continue to run it, the future of The White Lion in its present form is, at the very least, uncertain. The White Lion was listed as an ACV until it expired on 15th May.

Alarmed at the potential imminent loss of a fantastic pub and local asset, Aldershot Civic Society, working with CAMRA, local councillors and other members of the community galvanised interest amongst the wider community to get together and fund raise to buy and run the pub.

If this can be achieved it means that the pub would be both owned and controlled by a significant number of people from within the community. As a result, local folk would have a real stake in the pub and the opportunity to have a say in how it is run. The White Lion can then become a facility which truly reflects the wants and needs of the local area whilst still being a viable business – helped by the fact that people will often be more inclined to support and use ‘their’ pub.

An initial PUBLIC MEETING was held in the White Lion on Thursday 23rd January, where approx 140 people crammed into the pub to hear Mark Dodds an advocate and campaigner for preserving and enhancing the social value of pubs debunk some of the myths around community ownership of pubs and showed how this had been achieved for all sorts of pubs around the country.

A further meeting was held on Tuesday 28th January where a Management Committee was formally elected and the process started to join the Plunkett Foundation which will enable initial funding to cover costs of developing a genuine community bid.

If you have not visited the White Lion, it’s well worth calling in when they reopen at 20 Lower Farnham Road, Aldershot. GU12 4EA.

If you want to be kept informed of progress then ask at the bar to leave your contact details, send an email to: savethewhitelionaldershot@gmail.com or visit the campaign Website for up to date information http://www.whitelionaldershot.co.uk/